Mercutio: I talk of dreams,
Which are the children of an idle brain,
Begot of nothing but vain fantasy,
Which is as thin of substance as the air
And more inconstant than the wind

I’ll never forget the first time I saw Romeo & Juliet. I was young, and despite knowing the outcome of the tragic love story I was unprepared for the realness of the characters, the truth of their emotions, and the stark, gut-wrenching inevitability of the climactic scene which left me breathless and shaken to my core, unearthing emotions I hadn’t encountered in my short life but which, somehow, I understood.

Since then I’ve performed, directed, taught, and studied the play in many forms and each time, without fail, the work reveals further shades of beauty, paradox, irony and consequence. And each time I’m left astonished by the power and authenticity of this ubiquitous tale. This, of course, is the genius of Shakespeare. He exposes the gore of human struggle with shocking clarity while also elevating the most ordinary of life’s moments to heights of transcendent meaning. And in Romeo & Juliet this magic extends far beyond the central love relationship, arguably finding its greatest power in the simplicity and ferocity of the friendships that surround them.

One of Shakespeare’s greatest tools is his acute awareness of narrative timing, orchestrating precise moments of revelation to position the audience as unwitting and unwilling parties to circumstances beyond the characters’ control. We as viewers find ourselves in that torturous realm of bearing too much knowledge while possessing too little power, watching helplessly as events hurtle toward their inevitable conclusion. And with this very deliberate tactic Shakespeare masterfully underpins the ecstasies and agonies of fate, that omnipresent force constantly invoked by the characters in the throes of their helplessness.

Fate and premonition feature large in Shakespeare’s work, and the audience is challenged to consider the play of cause and effect in each character’s arc, in particular the torment of thwarted plans and mislaid intentions. Shakespeare uses this powerful form of character-sympathy to great effect, causing us to align ourselves not only with Romeo and Juliet, but with the entire cast, both good and bad. We find ourselves in admiration of Tybalt, entranced by his unflinching honor and prowess– qualities even the cynical Mercutio is forced to respect in his appraisement of Tybalt’s character. We are ever grateful for the presence of the able but peace-loving Benvolio, loyal and caring to a fault but a man’s man when the occasion calls. The Nurse and Friar Lawrence play stable, wise adults amidst the tumultuous broil of youthful passion, but are real enough to make mistakes and to accept their own impotence amidst the all-consuming hatred of the two households.

But above all it’s Mercutio who steals the play. From the moment he first appears we feel the tangible pull of his tragic fate as strong as that of Romeo’s. In a way his story surpasses even that of his friend’s in the scope of its tragedy because he’s the only one who remains faultless and yet can see the entire charade for what it is: “nothing but vain fantasy, which is as thin of substance as the air and more inconstant than the wind.”

Mercutio is, in my opinion, the pinnacle of Shakespeare’s ‘fool’ characters, whose mocking humor betrays their insight into the reality of circumstances, most significantly the futile struggle against the pride and inconstancy of man. His death is among the most telling and tragic moments of the stage, because with him dies the truest of all loyal, wise and innocent spirits.

John McEnery’s portrayal in Franco Zeffirelli’s 1968 film is one of the truest renditions. From the madness of the Queen Mab speech through to his untimely death, the sheer mortality of the character simmers beneath McEnery’s every mocking phrase and slapstick outburst. Never once does he misinterpret or let slip the intensity of Mercutio’s loyalty to Romeo, even in the moment of death. McEnery’s Mercutio knows the imminence of his fate, and yet when he meets it, he wrestles still with the senselessness of the loss of his young life at the hands of an ancient, baseless feud. This is what makes his famous curse so much the fullness of despair and fatality: “A plague on both your houses!” 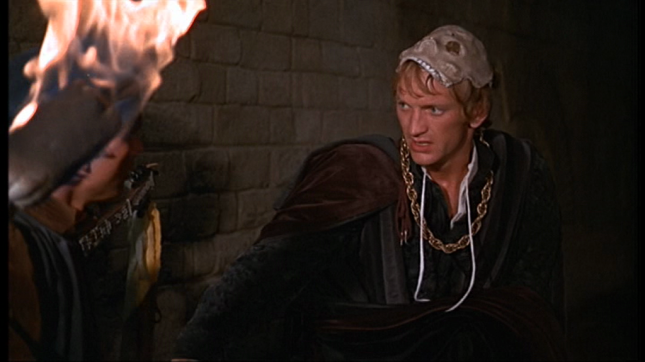 Taking us far beyond a tragic love story, in Romeo & Juliet Shakespeare captures completely the beauty and violence of young male friendship, rivalry and loyalty, and through each new interpretation it is those scenes, full of hot-blooded mateship and mischief, that are most savoured, that enthral our emotion and attention. The lewd and tempestuous fight scene that opens Act 1; the bizarre yet insurmountable Queen Mab speech; the verbal jousting between Romeo and Mercutio; and the catalytic fray in Act 3 that brings about the death of Mercutio and Tybalt and the banishment of Romeo, and which, some would argue, is the truest climax of the story, packing as much emotional significance as even the lover’s tomb scene.

Romeo & Juliet is more than a tale of ill-fated love and the futility of pure intentions in an ancient vendetta of hate — it is a testament to the nobility and beauty of intimate allegiance, never so strong as in the emotional upheaval of blind youth. It is a celebration of the colour and passion of human relationships, a message that Mercutio sings loud throughout the play and which will never ring dull on the ears of a willing audience who are ready to follow him open-eyed into the twin frays of triumph and tragedy.